Not that we’re aware of anyone who had their act together quick enough to run it, but Utah’s slot canyon Dirty Devil River surged to a whopping 5,500 cfs in a flood near Hanksville on Sept. 2, promising a rollicking ride to anyone brave enough to float it (and quick enough to catch the pulse). Rumors have it surging to a whopping 19,000 cfs farther downstream during the deluge, before carrying its namesake sediment into Lake Powell.

“I knew of some people who were hoping to go and run it,” says Sarah Tingey, co-owner of Alpacka Rafts, based in nearby Mancos, Colo. “But by the time they were loading the car in the morning it had already dropped back down so they didn’t end up driving out there. I don’t know of anyone who was actually able to get on it at 19K.” 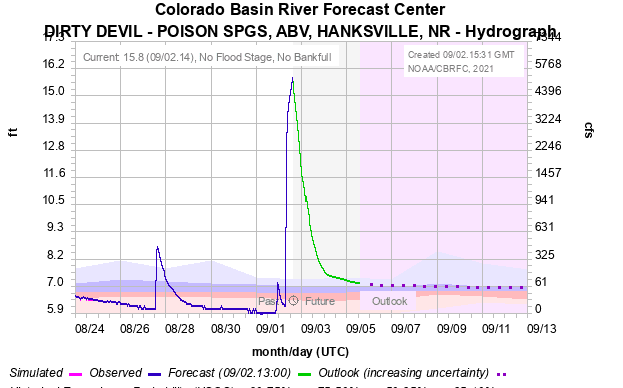 The biggest dilemma when planning a float trip down the Dirty Devil is timing for flows are sufficient for floating. On average, March and April are the only months that the river is potentially floatable. It can be done with flows as low as 65 cfs if you are willing to drag your boat for the first few days. But guidebooks warn to always be aware of such flash floods — even if the skies are clear above you.

History Note: The name “Dirty Devil” tells it all. John Wesley Powell passed by the mouth of this stream on his historic exploration of the Colorado River. When someone asked whether it was a trout stream, a boatman shouted back, “No she is a dirty devil”, and the river has been known by that name ever since.

Big water boaters in southern Montana and northern Wyoming were either licking their chops or hiding their boating gear...

I’ve learned a new word in Spanish: “Nudillos.” It means “knuckles,” and that’s exactly what the sloth is extending...

Get ready to be on the edge of your...
Events

There’s a new King and Queen of the North...